A-1 Moving & Storage helps deliver over 6,000 Pounds of Food to Fight Hunger in Florida 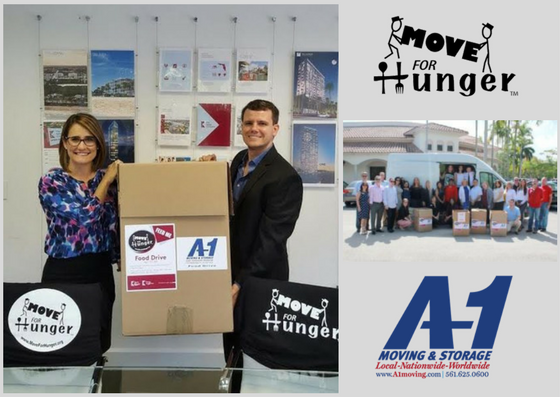 The Keyes Company and Illustrated Properties, the largest independently-owned real estate firm in Florida, held a food drive last year across 53 of their office locations from April 17-28 in an effort to support their neighbors in need. The Realtors of the Jupiter-Tequesta-Hobe Sound Board of the Miami Association of Realtors (JTHS), also held a food drive during the same time. Overall, the food drives were an immense success and led to the collection of more than 6,200 pounds of food — enough to provide nearly 5,200 meals

A-1 Moving and Storage of Jupiter, an Atlas agent, generously volunteered to supply each location with supplies and delivered the donations to various food banks which serve Broward, Palm Beach and Miami-Dade counties.

The Keyes Company and Illustrated Properties recently joined the Move For Hunger network and the food drive was held to kick off their new partnership. Jason Pappas, a Keyes Sales Associate who oversaw the food drive, told South Florida citybizlist that The Keyes Company is very excited to be partnering with Move For Hunger because the organization is “making an incredible difference for our society, and we’re proud to support its efforts to help fight hunger.”

As part of their partnership, The Keyes Company agents will now be providing materials to their clients to raise awareness about hunger in their community and urging them to donate their non-perishable food when they move. The service is free to customers and turns every move into an opportunity to make a difference in the lives of people facing hunger, simply by donating what they can spare on moving day.

There are over 3.2 million people in the state of Florida who struggle with food insecurity, including 1 in 4 children. Many thanks to The Keyes Company, Illustrated Properties, JTHS, and A-1 Moving & Storage for taking the initiative to fight hunger in their community!